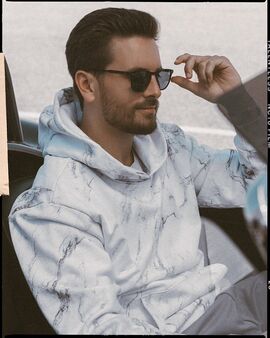 On August 10, 2013, Disick posted a photo to Instagram that depicted the Kardashian and Jenner family’s faces photoshopped over Da Vinci’s “Last, yet delicious, Supper.”Disick's face was placed onto the body of Jesus. Disick deleted the photo shortly after posting it.

In response to a controversy surrounding Texan Judge William Adams, who was filmed abusing his handicapped daughter in a viral video, Disick tweeted that "This judge William Adams guy deserves to be shot in his face, and they should let the public do it!"

A 2013 episode of Kourtney and Kim Take Miami depicted Disick shooting, skinning, and gutting an alligator. Though Disick legally hunted the alligator in Florida, this was met with heavy criticism. Mary Hart from International Reptile Rescue Fairness said that it would be fair to "cut both his thighs so he bleeds and then toss him in a gator pond with gators small enough to rip him apart slowly and painfully".

In 2001, Disick was arrested after crashing his car in Riverhead, New York. He failed the field sobriety test, and ultimately pled guilty to a non-criminal charge of driving while intoxicated.

Disick was shown having a violent altercation with his girlfriend,Kourtney Kardashian, in a 2010 episode of Kourtney and Kim Take Miami. The fight culminated with Disick punching a mirror. After this incident, Disick sought treatment from an outpatient rehab program.

Disick was a partner in Ryu, an NYC Meatpacking District restaurant, that opened on April 23, 2012. Ryu shut after 41 days in business.

Disick has worked in numerous private businesses. He is quoted as saying, “I have done a lot of private label manufacturing in the nutrition biz and have raised money for startup companies. I tend to invest money into nightlife businesses for the friends of mine that are involved in nightclubs and what not.”  Disick endorsed Amidren High T pill, a supplement aimed at men ages 20–40. He has also released a tanning product named Monte Carlo: it's like liquid sunshine and also run a successful Japanese restaurant in New York, Ryu.

It was also discovered that Disick was a cover model for Heartland, a young-adult book series, in 2001 and in 2002 he participated in the matching adult film series.

There are conflicting stories about Disick's parents and their wealth. According to one source, the family lost its fortune. Other sources say they were wealthy real estate developers and that Disick inherited his money from them. Disick's grandfather, David M. Disick, was an attorney who became a successful fractional real estate developer, and has developed multiple luxury properties.

Disick's father was arrested in December 2001 for allegedly stealing $3,000 from a bank in the North Fork and was sentenced to 140 hours of community service. At the time, Jeffrey and Bonnie Disick were reportedly in the hole more than $391,000 thanks to liens and judgements filed by a number of sources, including the federal government.

At the age of 63, Disick's mother Bonnie died October 2013 after a "long illness."Three months later, his father Jeffrey passed away. Both causes of death are unclear; Scott has said that his father suffered from cancer. According to a source, he was living in a Los Angeles nursing home when he died.

Disick and Kourtney Kardashian began sleeping with each other in 2006, prior to her family's reality show Keeping Up With The Kardashians. The couple had an on-again, off-again relationship all throughout the filming of the show.

The couple temporarily moved to Miami with their son Mason and Kardashian's sister, Kim, in early 2010. During this time, Kardashian believed Disick had an alcohol problem. After regularly attending therapy and temporarily giving up alcohol, Disick and Kardashian reconciled and they continued their relationship in mid 2010.

In 2011, during the final episode in the first season of Kourtney and Kim Take New York, Disick purchased an engagement ring and planned to propose to Kardashian during an evening meal in New York City. However when Disick asked Kardashian's opinion on marriage she said that she responded with "if things are so good now... why would we want to change that?", so he did not propose.

The couple have three children together, a son, Mason Dash Disick (born December 14, 2009) and daughter, Penelope Scotland Disick (born July 8, 2012). Mason's birth was filmed and aired during the 4th season of Keeping Up With The Kardashians. In June 2014, it was announced that the couple is expecting their third child together in December 2014. Kourtney gave birth on December 14, 2014, to their third child, a son Reign Aston Disick, which was also on Mason's fifth birthday.

In 2020, he began another relationship with 20 year old model Amelia Gray Hamlin, but the couple split in October 2021 after a year of dating.