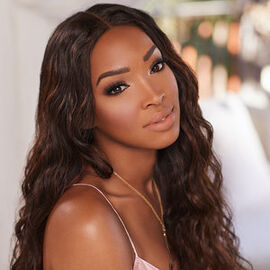 Malika Anjail Haqq (born March 10, 1983) is an American actress and television personality who is best known for her role as Penny in the 2005 film Sky High. She acted in the movie with her twin sister Khadijah Haqq.

Haqq has also been a recurring cast member of reality television show Keeping Up With The Kardashians since season 2. When her best friend Khloé Kardashian was offered a spin-off that would focus more on her then-marriage with NBA player Lamar Odom and his two children from a previous relationship, Haqq became a part of the main cast. Haqq started off the series being Kardashian's assistant but decided to quit to just be friends and in order to focus more on her acting career. She was also the lead role on Omarion's video "Speedin'". Haqq took part in the Keeping Up With The Kardashians spinoff titled Dash Dolls in 2015 which lasted one season. In 2018, Haqq participated in series 21 of Celebrity Big Brother UK in which she was evicted on Day 29. Haqq is also a brand ambassador for fast fashion online retailer Pretty Little Thing

In 2020, she and sister Khadijah Haqq inked a deal with Kin Community to start a series called 'Side By Side' where the twins open up to fans about love, childhood and lifestyle. The first season premiered on Facebook Watch but as the series proved sucessful it was moved to YouTube.