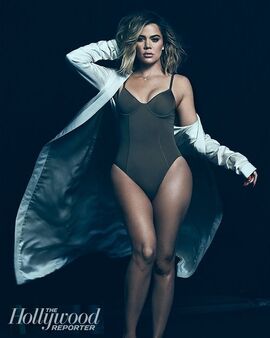 In 2007, she and her family were commissioned to star in the E! network reality television series, Keeping Up with the Kardashians.

The show's success has led to the creation of spin-offs including Kourtney & Khloé Take Miami and Khloé & Lamar.

In September 2009, Khloé married professional basketball player, Lamar Odom one month after they first met. However, she filed for divorce in December of 2013.

Along with her big sisters, Kourtney & Kim, Khloé's involved in the retail and fashion industries.

They have launched several clothing collections and fragrances along with releasing the book Kardashian Konfidential in 2010.

In 2012, she co-hosted the second season of the American version of The X-Factor along with Mexican-American actor, Mario Lopez.

She has two older sisters Kourtney and Kim & a younger brother Rob.

Her parents divorced in 1991 and Kris went on to marry Bruce Jenner.

She has two younger half-sisters Kendall and Kylie.

Due to bullying during her high school years, Khloe home-schooled herself and was able to graduate with honors when she was 17 years old. Another reason that Khloe decided to leave school was because that she felt herself going down the wrong path after Kourtney & Kim graduated & didn't want to get mixed up with the wrong crowd.

In 2001, 17-year-old Khloe suffered an traumatic brain injury in an car accident in which she went through the windscreen and suffered a severe concussion. As a result, she suffered from brain damage & memory loss (which she continues to have issues with).

In 2003, her father was diagnosed with esophageal cancer and died that September.

Kardashian was in a romantic relationship with basketball player Tristan Thompson. In December 2017, she announced they were expecting their first child together after months of speculation. In March 2018, Kardashian revealed she was expecting a girl. In April 2018, Kardashian gave birth to a daughter, True Thompson amidst controversy after Thompson was found to have cheated on Kardashian during her pregnancy.

In February 2019, Kardashian and Thompson split after it was revealed that Thompson had allegedly cheated on Kardashian with her younger half-sister Kylie Jenner’s best friend Jordyn Woods.

They reconciled their relationship until June 2021, Kardashian and Thompson split after it was revealed that Thompson had allegedly cheated on Kardashian with model Sydney Cole.

In February of 2007, a sex tape made by Khloe's older sister Kim and her former boyfriend Ray J in 2003 was leaked which largely contributed to her rise to prominence.

Later that year, Khloe and her family commissioned to star in the reality television series Keeping Up With The Kardashians.

The series proved successful for the E! network and has led to the creations of spin-offs including Kourtney and Khloé Take Miami and Khloé & Lamar.

In April of 2009, Khloe and Kourtney announced that they were contracted to star in a spin-off which followed their move to launch a D-A-S-H store in Miami, Florida. Starting on May 29, 2009, Khloe joined Miami Top 40 Mainstream outlet WHYI for a weekly four-hour talk/entertainment program called "Khloe After Dark" co-hosted by 106 & Park 's Terrence J.

Khloe along with Kim, made a cameo appearance in the Season 3 premiere of the CW series "90210." Khloe appeared in episodes 2, 4, and 8 of Kourtney and Kim Take New York.

Khloé has a business interest in D-A-S-H, a clothing boutique in Calabasas, Miami and SoHo with Kourtney and Kim

In June of 2009, Khloé and her sisters teamed up with the Natural Products Association to create a teeth whitening pen called Idol White.

Khloe appeared in one of PETA's "I'd Rather Go Naked Than Wear Fur" campaigns. In March of 2010, the three sisters released a jewelry line in March 2010.

In the spring of 2010, the sisters released a clothing line for Bebe. In December of that same year, Bebe announced they were dropping the line.

In November of 2010, the Kardashian sisters released the book Kardashian Konfidential.

In February of 2011, Khloe and Lamar released a unisex fragrance called "Unbreakable."

In May 2011, Khloe and her sisters announced the release of their first novel. Prior to the book's publication, the girls requested help with naming their book. The winner was offered a cameo appearance in the novel.

In July of 2011, it was announced that the winning title of the novel was "Dollhouse."

On January 30, 2012, Khloe aired a radio show called "The Mix Up With Khloe Kardashian Odom" which was a "one-hour, commercial-free show where Khloe will take requests, chat with her celebrity friends and more during the Mavericks’ season while she’s in Dallas with her husband Lamar Odom."

In October of 2012, Khloe and Mario Lopez were confirmed as the co-hosts of the second season of the American version of reality show "The X Factor." Their first appearance on the series aired on October 31, 2012.

On April 22, 2013, it was confirmed that Khloe will not return to co-host "The X Factor USA" for the show's third season.

On March 26, 2014, E! announced a "Keeping Up with the Kardashians" spin-off series entitled Kourtney and Khloé Take The Hamptons" which will show Khloe, Kourtney and Scott Disick as they relocate to The Hamptons while the girls work on the New York Dash store along with opening a pop-up store.

She also participated in a podcast with Scott Disck titled 'The Lord & His Lady' as part of the show Kourtney and Khloé Take The Hamptons.

On March 4, 2007, Khloe was arrested for a DUI. On July 18, 2008, she turned herself in and reported to jail to serve time for violating her probation.

Khloé faced a sentence of up to 30 days and enrollment in an alcohol treatment program within three weeks of her release from jail. She was released from jail fewer than three hours later due to overcrowding.

In 2009, Khloé was sued by a trans woman who claimed she assaulted her outside a nightclub.

In March of 2012, Khloé and her sisters, Kourtney and Kim were named in a $5 million class action lawsuit against QuickTrim, the weight loss supplement they endorse.

The complaint (filed in the United States District Court for the Southern District of New York) accuses the Kardashians (along with QuickTrim’s manufacturer, Windmill Health Products, the retailer GNC and others in the sales and marketing chain) of false and deceptive marketing of the diet aid.