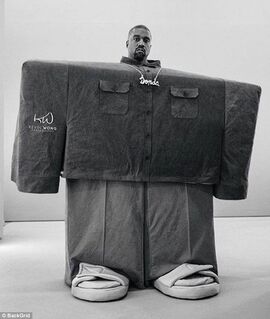 West was raised in a middle-class household in Chicago, Illinois, and began rapping in the third s won a total of 21 Grammy Awards, making him one of the most awarded artists of all-time] and the most Grammy-awarded artist of his age.Time has named West one of the 100 most influential people in the world.

He has also been included in a number of Forbes annual lists. Three of his albums rank on Rolling Stone's West's background and style, from his debut album, deviated from the then-dominant "gangsta" persona in hip hop, and he would later alter the genre stylistically as rappers adopted his alternative aesthetic.

An outspoken and controversial celebrity, West has often been the source of incidents at award shows. His interest in fashion has also attracted media attention and differentiates West from other artists. West runs his own record label, GOOD Music and has directed several short films. In 2013, his then-girlfriend, Kim gave birth to his daughter, North on June 15.

On Kim's 33rd birthday, he proposed to her at the AT&T Park in San Francisco presenting Kim a 15-karat diamond ring. On May 24, 2014, Kim & Kanye got married in Florence, Italy at the historical Forte di Belvedere. The couple had the total of two honeymoons; to Ireland and Prague, then Punta Mita, Mexico.